How perfect is too perfect? Research reveals robot flaws are key to interacting with humans 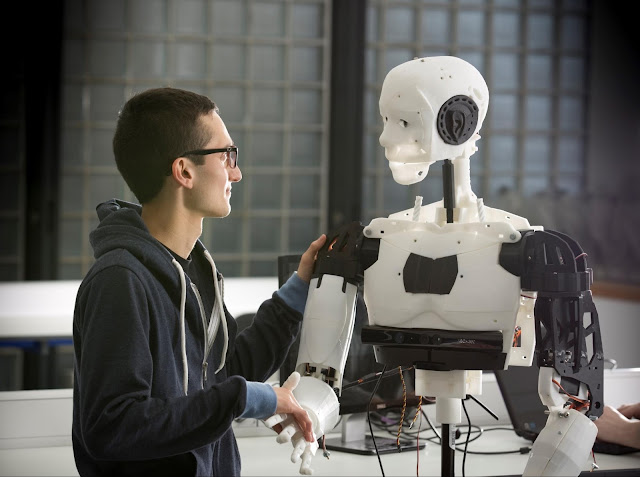 Marc, a 3D-printed robot from the same lab, gives out a friendly handshake.
Marc will be used for further study. Image: University of Lincoln

(October 15, 2015)  Humans are less likely to form successful working relationships with interactive robots if they are programmed to be too perfect, new research reveals.

Interactive or ‘companion’ robots are increasingly used to support caregivers for elderly people and for children with autism, Asperger syndrome or attachment disorder, yet by programming their behaviour to become more intelligent we could in fact be creating barriers to long-term human-robot relationships, the research suggests.

Conducted by robotics experts from the University of Lincoln, UK, the study found that a person is much more likely to warm to an interactive robot if it shows human-like ‘cognitive biases’ - deviations in judgement which form our individual characteristics and personalities, complete with errors and imperfections.

The investigation was conducted by PhD researcher Mriganka Biswas and overseen by Dr John Murray from the University of Lincoln’s School of Computer Science. Their findings were presented at the International Conference on Intelligent Robots and Systems (IROS) conference in Hamburg in October 2015.

Mriganka said: “Our research explores how we can make a robot’s interactive behaviour more familiar to humans, by introducing imperfections such as judgemental mistakes, wrong assumptions, expressing tiredness or boredom, or getting overexcited. By developing these cognitive biases in the robots – and in turn making them as imperfect as humans – we have shown that flaws in their ‘characters’ help humans to understand, relate to and interact with the robots more easily.”