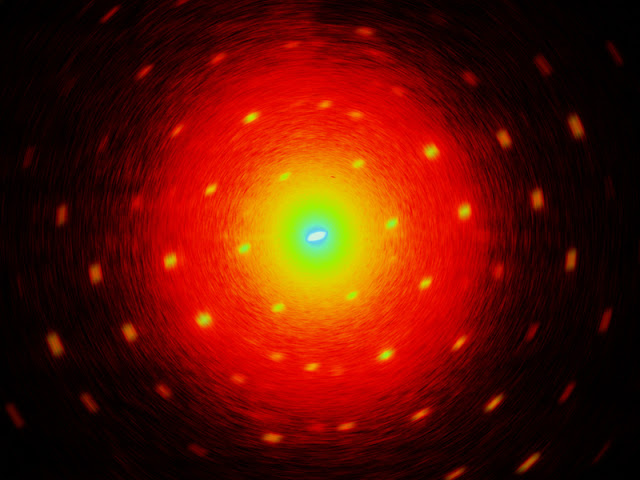 If ultrashort electron pulses hit a biomolecular crystal, they are diffracted from it.
As a result, one obtains a ... [more] Graphic: Alexander Gliserin

(October 27, 2015)  Physicists of the Ludwig-Maximilians-Universität Munich and the Max Planck Institute of Quantum Optics shorten electron pulses down to 30 femtoseconds duration. This enables them to gain detailed insight into atomic motions in molecules.

Electrons are odd particles: they have both wave and particle properties. Electron microscopy has been taking advantage of this phenomenon for roughly a century now and grants us a direct insight into the fundamental components of matter: molecules and atoms. For a long time, still images were provided, but for some years now scientists are making tremendous progress in short-pulse technology. They create beams of electron pulses, which can, due to their extremely short flashing, provide us with very sharp images of moving atoms and electrons. Nevertheless, some of the fastest processes still remained blurred. A team of the Laboratory for Attosecond Physics (LAP) from the Ludwig-Maximilians-Universität (LMU) and the Max Planck Institute of Quantum Optics (MPQ) has now managed to shorten electron pulses down to 28 femtoseconds in duration. One femtosecond is a millionth of a billionth of a second (10-15 s). Such shutter speeds enable us to directly observe the truly fundamental motions of atoms and molecules in solids, similar to stroboscopy.

Those who want to explore the microcosm and its dynamics need a high-speed camera for atoms. In order to sharply capture motions of such particles during a reaction, one needs to work with “shutter speeds” in the range of femtoseconds, since this is the speed of reactions in molecules and solids. Commonly, femtosecond-short shutter speeds are provided by short-pulse laser technology, but laser light is not able to spatially resolve atoms. Scientists from the Laboratory for Attosecond Physics at LMU and MPQ have now succeeded in producing ultrashort electron pulses with a duration of only 28 femtoseconds. This is six times shorter than ever before. The length of the matter wave is only about eight picometers; one picometer is a trillionth of a meter (10-12 m). Due to this short wavelength, it is possible to visualize even single atoms in diffraction experiments. If such electrons meet a molecule or atom, they are diffracted into specific directions due to their short wavelength. This way they generate an interference pattern at the detector from which an atomic 3D-structure of the examined substance is reconstructed. If the pulses are short enough, a sharp snapshot of the movement is the result.