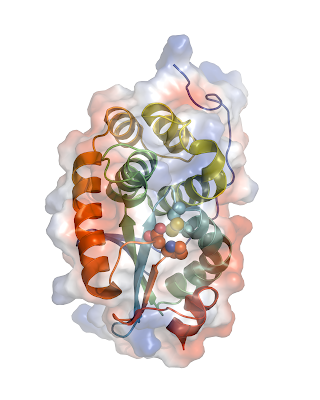 The Corynebacterium diphtheria MdbA enzyme’s thiol-disulfide oxidoreductase fold
is shown as arrows and two flanking helices in the lower part of the image. Protein
components of the enzyme’s active site are depicted as spheres. The electrostatic
potentials across the surface of the molecule are shown as semitransparent features,
with blue and red shading representing positive and negative potentials, respectively.

(October 20, 2015)  Researchers at the University of Texas, the University of Connecticut, and the U.S. Department of Energy's (DOE's) Argonne National Laboratory have discovered structural similarities among bacteria of various types that create the possibility of using similar approaches to fight the infections they cause.

The research began by studying Actinomyces bacteria, which commonly cause oral abscesses and gum tissue infections. As it happens, the most odious species of this type must rely on Actinomyces oris (A. oris) bacteria to make attachments to mouth tissues. In this way, the researchers were led to study how A. oris bacteria make their crucial attachments.

Bacteria secrete a wide variety of proteins, which are large, complex molecules whose ability to recognize and interact with other molecules depends critically on how they fold to become three-dimensional structures with active sites. A. oris bacteria attach to bodily cells and other bacteria by means of two types of protein composites: one type permits the bacteria to adhere to tooth surfaces, and the other is crucial for forming biofilms and bacterial colonies on gum tissues. These stubby hair-like proteins are assembled outside an A. oris bacterium's cell wall using protein pieces secreted in their unfolded, and therefore useless, state. The purpose of the research was to learn enough about how the pieces, called pili proteins, fold upon assembly to formulate antibiotic strategies for disrupting the folding process.

"These pili are very important for virulence, but they must be arranged and folded correctly in order for a pathogen to recognize and interact with a person's bodily cells," said Argonne Distinguished Fellow Andrzej Joachimiak, who collaborated in the research and is the Director of the Midwest Center for Structural Genomics and the Structural Biology Center. "Before we undertook this study, people didn't understand how the proteins folded when being assembled. This is a completely new discovery."