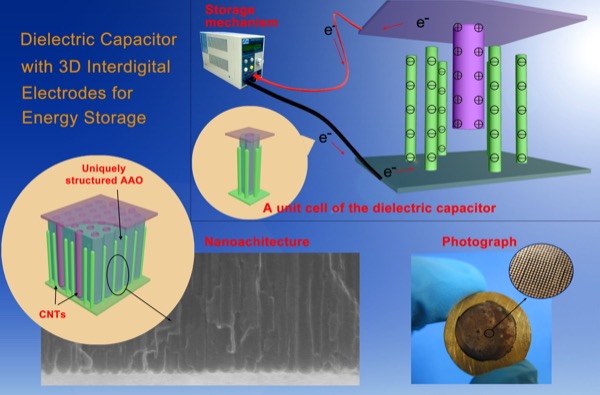 A diagram of the dielectric capacitor research.

For Back to the Future fans, this week marked a milestone that took three decades to reach.

Oct. 21, 2015, was the day that Doc Brown and Marty McFly landed in the future in their DeLorean, with time travel made possible by a “flux capacitor.”

A great deal of effort has been devoted to improving this feature — known as energy density — of dielectric capacitors, which comprise an insulating material sandwiched between two conducting metal plates.

Now, a group of researchers at the University of Delaware and the Chinese Academy of Sciences has successfully used nanotechnology to achieve this goal.

The work is reported in a paper, “Dielectric Capacitors with Three-Dimensional Nanoscale Interdigital Electrodes for Energy Storage,” published in Science Advances, the first open-access, online-only journal of AAAS. 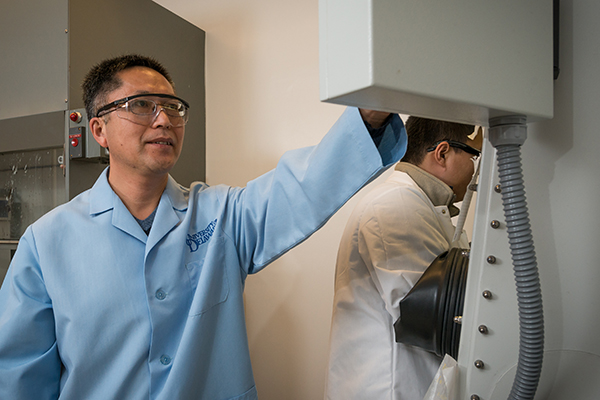 UD's Bingqing Wei is part of a research team that has reported on the use
of nanotechnology to improve the energy density of dielectric capacitors.

“With our approach, we achieved an energy density of about two watts per kilogram, which is significantly higher than that of other dielectric capacitor structures reported in the literature,” says Bingqing Wei, professor of mechanical engineering at UD.

“To our knowledge, this is the first time that 3D nanoscale interdigital electrodes have been realized in practice,” he adds. “With their high surface area relative to their size, carbon nanotubes embedded in uniquely designed and structured 3D architectures have enabled us to address the low ability of dielectric capacitors to store energy.”

One of the keys to the success of the new capacitor is an interdigitated design — similar to interwoven fingers between two hands with “gloves” — that dramatically decreases the distance between opposing electrodes and therefore increases the ability of the capacitor to store an electrical charge.

Another significant feature of the capacitors is that the unique new three-dimensional nanoscale electrode also offers high voltage breakdown, which means that the integrated dielectric material (alumina, Al2O3) does not easily fail in its intended function as an insulator.