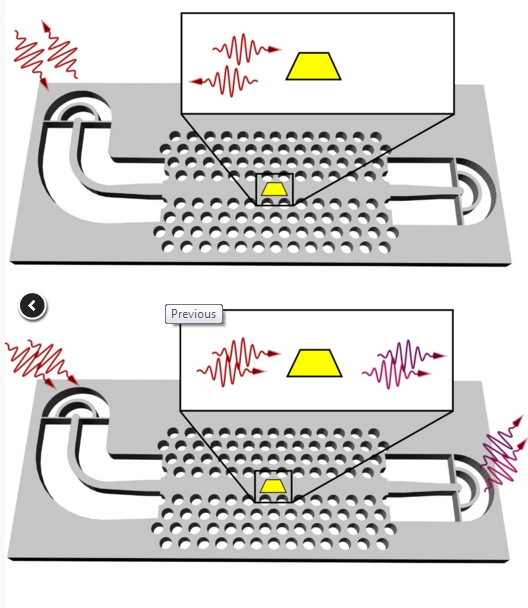 The illustration shows an optical chip embedded with a so-called quantum dot.
The quantum dot can function as a gateway or transistor for photons.
The drawing on top shows that if you send a single photon into the quantum dot,
it will be thrown back – the gateway is closed. The lower drawing shows that if you send
two photons, the gateway opens the two photons are sent onwards. So the quantum dot
works as a photon contact and this is an important component when you want to build
complex quantum photonic circuits on a large scale. Illustration: Alisa Javadi, Niels Bohr Institute.

(October 23, 2015)  There is tremendous potential for new information technology based on light (photons). Photons (light particles) are very well suited for carrying information and quantum technology based on photons – called quantum photonics, will be able to hold much more information than current computer technology. But in order to create a network with photons, you need a photon contact, a kind of transistor that can control the transport of photons in a circuit. Researchers at the Niels Bohr Institute in collaboration with researchers from the Korea Institute of Science and Technology have managed to create such a contact. The results are published in the scientific journal Nature Communications.

Quantum information can be sent optically, that is to say, using light, and the signal is comprised of photons, which is the smallest component (a quantum) of a light pulse. Quantum information is located in whichever path the photon is sent along – it can, for example, be sent to the right or to the left on a semi-transparent mirror. It can be compared to the use of bits made up of 0s and 1s in the world of conventional computers. But a quantum bit is more than a classical bit, since it is both a 0 and a 1 at the same time and it cannot be read without it being detected, as it is only a single photon. In addition, quantum technology can be used to store far more information than conventional computer technology, so the technology has much greater potential for future information technology. 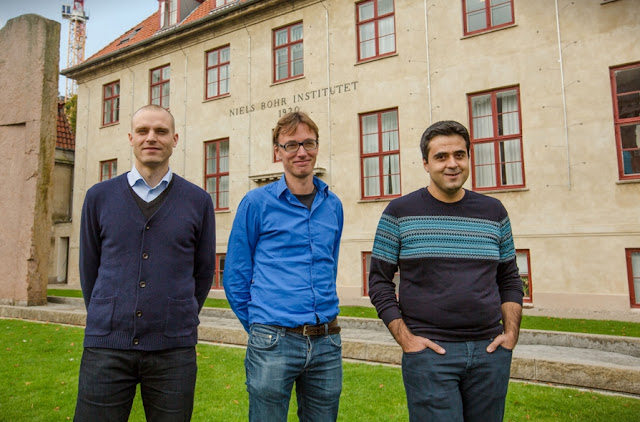 Søren Stobbe, associate professor, Peter Lodahl, professor and
Alisa Javadi, postdoc in front of the Niels Bohr Institute on Blegdamsvej at
the University of Copenhagen.

Controlling the light
Light normally spreads in all directions. But in order to develop quantum technology based on light, you need to be able to control light down to the individual photons. Researchers in the Quantum Photonic research group at the Niels Bohr Institute are working on this and to do so, they use an optical chip embedded with a so-called quantum dot. The optical chip is made up of an extremely small photonic crystal, which is 10 microns across (1 micron is a thousandth of a millimetre) and has a thickness of 160 nanometers (1 nanometer is a thousandth of a micron). Embedded in the middle of the chip is a so-called quantum dot, which is comprised of a collection of atoms. 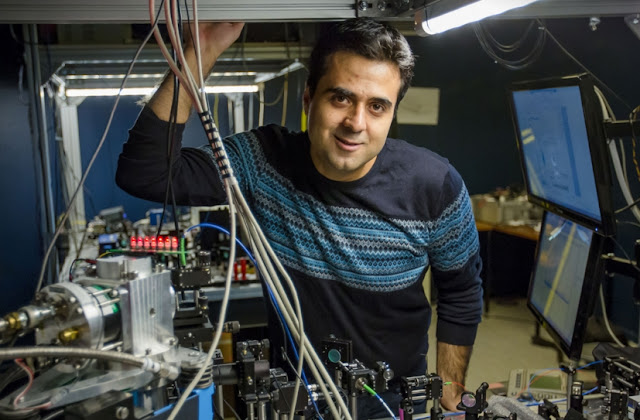 Alisa Javadi, postdoc in the Quantum Photonic research group, has worked with the
experiments in the laboratory at the Niels Bohr Institute, University of Copenhagen.

“We have developed the photonic chip so that the quantum dot emits a single photon at a time and we can control the photon’s direction. Our big new achievement is that we can use the quantum dot as a contact for the photons – a kind of transistor. It is an important component for creating a complex network of photons,” explains Peter Lodahl, professor and head of the Quantum Photonic research group at the Niels Bohr Institute at the University of Copenhagen.