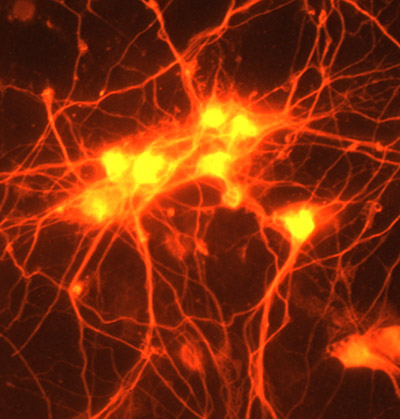 Sprouting connections in the brain: Adding GDF10 to neurons in a dish results
in the formation of new connections between brain cells. This process may lead
to recovery after stroke. Image courtesy of S. Thomas Carmichael, M.D., Ph.D.,
David Geffen School of Medicine at the University of California Los Angeles.

Looking at brain tissue from mice, monkeys and humans, scientists have found that a molecule known as growth and differentiation factor 10 (GDF10) is a key player in repair mechanisms following stroke. The findings suggest that GDF10 may be a potential therapy for recovery after stroke. The study, published in Nature Neuroscience, was supported by the National Institute of Neurological Disorders and Stroke (NINDS), part of the National Institutes of Health.

“These findings help to elucidate the mechanisms of repair following stroke. Identifying this key protein further advances our knowledge of how the brain heals itself from the devastating effects of stroke, and may help to develop new therapeutic strategies to promote recovery,” said Francesca Bosetti, Ph.D., stroke program director at NINDS.

Stroke can occur when a brain blood vessel becomes blocked, preventing nearby tissue from getting essential nutrients. When brain tissue is deprived of oxygen and nutrients, it begins to die. Once this occurs, repair mechanisms, such as axonal sprouting, are activated as the brain attempts to overcome the damage. During axonal sprouting, healthy neurons send out new projections (“sprouts”) that re-establish some of the connections lost or damaged during the stroke and form new ones, resulting in partial recovery. Before this study, it was unknown what triggered axonal sprouting.