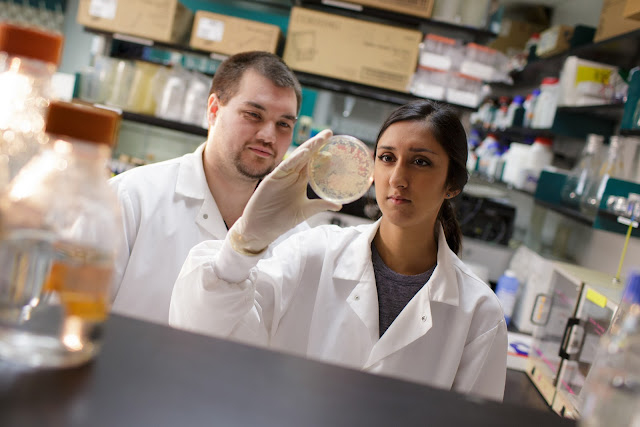 Brian Mahon and Avni Bhatt, graduate research assistants in the department of
biochemistry and molecular biology, inspect a bacterium that is used to produce
carbonic anhydrase. The carbonic anhydrase can potentially be used to neutralize
the carbon dioxide produced by industry and power plants, their research found.

(October 22, 2015)  A type of bacteria plucked from the bottom of the ocean could be put to work neutralizing large amounts of industrial carbon dioxide in the Earth’s atmosphere, a group of University of Florida researchers has found.

Carbon dioxide, a major contributor to the buildup of atmospheric greenhouse gases, can be captured and neutralized in a process known as sequestration. Most atmospheric carbon dioxide is produced from fossil fuel combustion, a waste known as flue gas. But converting the carbon dioxide into a harmless compound requires a durable, heat-tolerant enzyme. That’s where the bacterium studied by UF Health researchers comes into play. The bacterium — Thiomicrospira crunogena — produces carbonic anhydrase, an enzyme that helps remove carbon dioxide in organisms. So what makes the deep-sea bacterium so attractive? It lives near hydrothermal vents, so the enzyme it produces is accustomed to high temperatures. That’s exactly what’s needed for the enzyme to work during the process of reducing industrial carbon dioxide, said Robert McKenna, Ph.D., a professor of biochemistry and molecular biology in the UF College of Medicine, a part of UF Health.

“This little critter has evolved to deal with those extreme temperature and pressure problems. It has already adapted to some of the conditions it would face in an industrial setting,” he said.