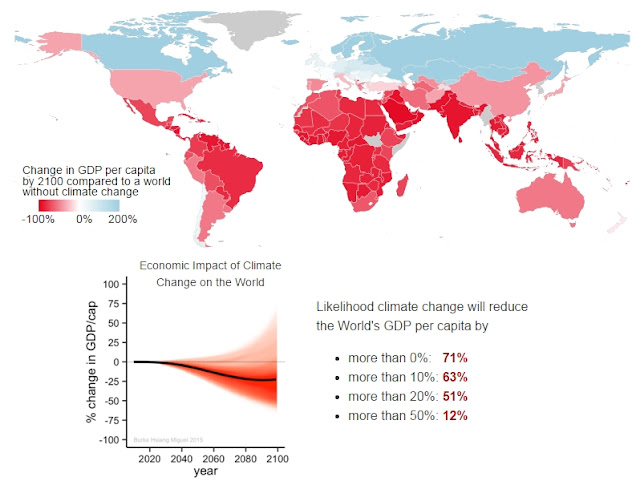 Select a country/region or click on the map to get estimates of how climate change
will affect GDP per capita as calculated in Burke, Hsiang, and Miguel (2015)

(October 24, 2015)  Stanford-Cal collaboration finds that without climate change mitigation, even wealthy countries will see an economic downturn by 2100.

When thousands of scientists, economists and policymakers meet in Paris this December to negotiate an international climate treaty, one question will dominate conversations: What is the climate worth?

A new study published in the journal Nature shows that the global economy will take a harder hit from rising temperatures than previously thought, with incomes falling in most countries by the year 2100 if climate change continues unchecked. Rich countries may experience a brief economic uptick, but growth will drop off sharply after temperatures pass a critical heat threshold.

The study, co-led by Marshall Burke, a professor of Earth system science at Stanford's School of Earth, Energy & Environmental Sciences, provides a clear picture of how climate change will shape the global economy, which has been a critical missing piece for the international climate community leading up to the Paris talks. Understanding how much future climate change will cost in terms of global economic losses will help policymakers at the meetings decide how much to invest in emissions reductions today.
The work was co-authored by two researchers from the University of California, Berkeley: co-lead author Solomon Hsiang, the Chancellor's Associate Professor of Public Policy, and Edward Miguel, Oxfam Professor in Environmental and Resource Economics.