Biologists Discover Bacteria Communicate Like Neurons in the Brain 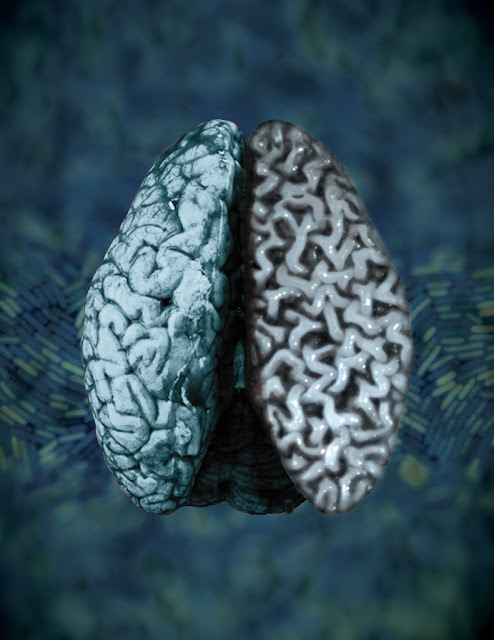 Bacteria within a biofilm (in background and close up in right hemisphere inset)
have similar electrical signaling mechanisms as neurons in the human brain. Credit: Suel lab

(October 21, 2015)  Biologists at UC San Diego have discovered that bacteria—often viewed as lowly, solitary creatures—are actually quite sophisticated in their social interactions and communicate with one another through similar electrical signaling mechanisms as neurons in the human brain.

In a study published in this week’s advance online publication of Nature, the scientists detail the manner by which bacteria living in communities communicate with one another electrically through proteins called “ion channels.

“Our discovery not only changes the way we think about bacteria, but also how we think about our brain,” said Gürol Süel, an associate professor of molecular biology at UC San Diego who headed the research project. “All of our senses, behavior and intelligence emerge from electrical communications among neurons in the brain mediated by ion channels. Now we find that bacteria use similar ion channels to communicate and resolve metabolic stress. Our discovery suggests that neurological disorders that are triggered by metabolic stress may have ancient bacterial origins, and could thus provide a new perspective on how to treat such conditions.” 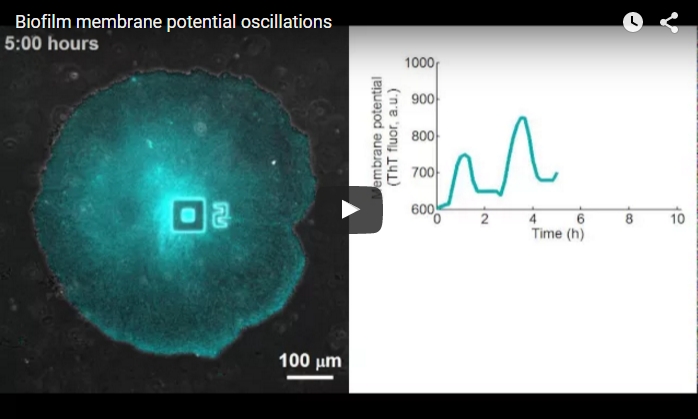 “Much of our understanding of electrical signaling in our brains is based on structural studies of bacterial ion channels” said Süel. But how bacteria use those ion channels remained a mystery until Süel and his colleagues embarked on an effort to examine long-range communication within biofilms—organized communities containing millions of densely packed bacterial cells. These communities of bacteria can form thin structures on surfaces—such as the tartar that develops on teeth—that are highly resistant to chemicals and antibiotics.

The scientists’ interest in studying long-range signals grew out of a previous study, published in July in Nature, which found that biofilms are able to resolve social conflicts within their community of bacterial cells just like human societies. When a biofilm composed of hundreds of thousands of Bacillus subtilis bacterial cells grows to a certain size, the researchers discovered, the protective outer edge of cells, with unrestricted access to nutrients, periodically stopped growing to allow nutrients—specifically glutamate, to flow to the sheltered center of the biofilm.