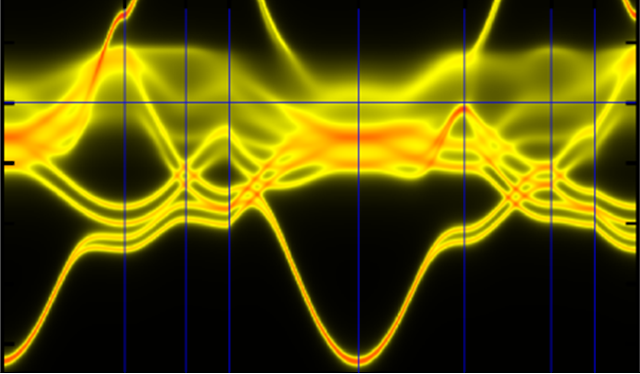 (October 30, 2015)  Designing alloys to withstand extreme environments is a fundamental challenge for materials scientists. Energy from radiation can create imperfections in alloys, so researchers in an Energy Frontier Research Center led by the Department of Energy’s Oak Ridge National Laboratory are investigating ways to design structural materials that develop fewer, smaller flaws under irradiation. The key, they report in the journal Nature Communications, is exploiting the complexity that is present when alloys are made with equal amounts of up to four different metallic elements.

“Chemical complexity gives us a way to modify paths for energy dissipation and defect evolution,” said first author Yanwen Zhang, who directs an Energy Frontier Research Center, called “Energy Dissipation to Defect Evolution,” or “EDDE,” funded by the U.S. Department of Energy Office of Science. The growing center is nearly 15 months old and brings together more than two dozen researchers with experimental and modeling expertise. EDDE has partners at Oak Ridge, Los Alamos and Lawrence Livermore national laboratories and the universities of Michigan, Wisconsin–Madison and Tennessee–Knoxville.

In a reactor, thousands of atoms can be set in motion by one energetic particle that displaces them from sites in a crystal lattice. While most of the displaced atoms return to lattice sites as the energy is dissipated, some do not. Irradiation can damage structural materials made of well-ordered atoms packed in a lattice—even obliterating its crystallinity. Existing knowledge of radiation effects on structural materials is mostly about reactor-core components. Over the life of a typical light water reactor, all atoms in the structural components can be displaced on average 20 times, and accumulated damage may threaten material performance. To prepare for new reactor concepts, scientists will have to design next-generation nuclear materials to withstand atoms displaced more than 200 times—a true “grand challenge.”