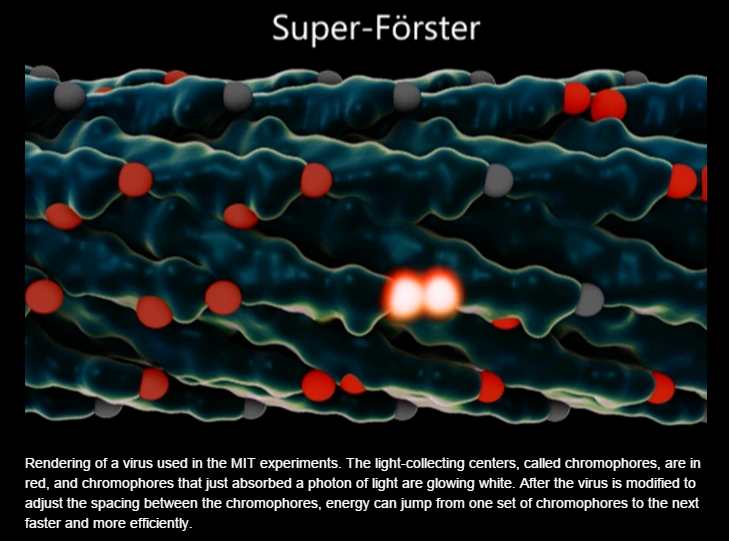 Courtesy of the researchers and Lauren Alexa Kaye

Nature has had billions of years to perfect photosynthesis, which directly or indirectly supports virtually all life on Earth. In that time, the process has achieved almost 100 percent efficiency in transporting the energy of sunlight from receptors to reaction centers where it can be harnessed — a performance vastly better than even the best solar cells.

One way plants achieve this efficiency is by making use of the exotic effects of quantum mechanics — effects sometimes known as “quantum weirdness.” These effects, which include the ability of a particle to exist in more than one place at a time, have now been used by engineers at MIT to achieve a significant efficiency boost in a light-harvesting system.

Surprisingly, the MIT researchers achieved this new approach to solar energy not with high-tech materials or microchips — but by using genetically engineered viruses.

This achievement in coupling quantum research and genetic manipulation, described this week in the journal Nature Materials, was the work of MIT professors Angela Belcher, an expert on engineering viruses to carry out energy-related tasks, and Seth Lloyd, an expert on quantum theory and its potential applications; research associate Heechul Park; and 14 collaborators at MIT and in Italy.

Lloyd, a professor of mechanical engineering, explains that in photosynthesis, a photon hits a receptor called a chromophore, which in turn produces an exciton — a quantum particle of energy. This exciton jumps from one chromophore to another until it reaches a reaction center, where that energy is harnessed to build the molecules that support life.

But the hopping pathway is random and inefficient unless it takes advantage of quantum effects that allow it, in effect, to take multiple pathways at once and select the best ones, behaving more like a wave than a particle. 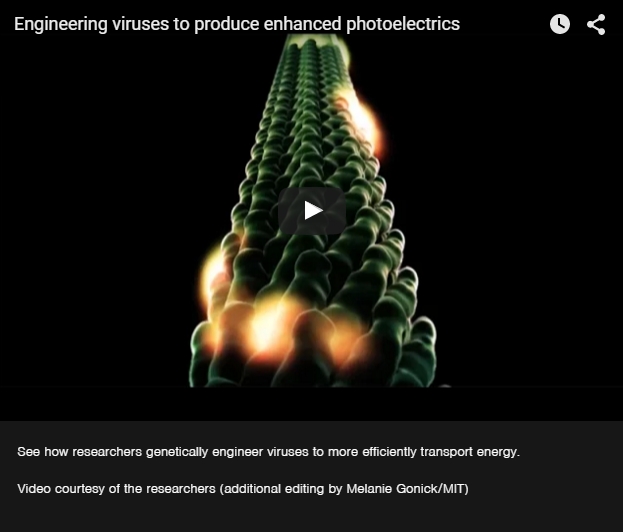 This efficient movement of excitons has one key requirement: The chromophores have to be arranged just right, with exactly the right amount of space between them. This, Lloyd explains, is known as the “Quantum Goldilocks Effect.”

That’s where the virus comes in. By engineering a virus that Belcher has worked with for years, the team was able to get it to bond with multiple synthetic chromophores — or, in this case, organic dyes. The researchers were then able to produce many varieties of the virus, with slightly different spacings between those synthetic chromophores, and select the ones that performed best.