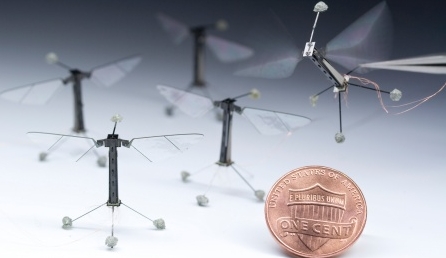 Robot insects may someday be used in agriculture and disaster relief situations.
Credit: Microrobotics Lab, Harvard John A. Paulson School of Engineering and
Applied Sciences and the Wyss Institute for Biologically Inspired Engineering.

(October 21, 2015)  The flying insects, designed for agriculture and disaster relief, will rely on technology used by driverless cars

How do you teach robotic insects to see?

By equipping them with tiny laser-powered sensors that act as eyes, enabling the miniature machines to sense the size, shape and distance of approaching objects.
“Essentially, it’s the same technology that automakers are using to ensure that driverless cars don’t crash into things,” says University at Buffalo computer scientist Karthik Dantu. “Only we need to shrink that technology so it works on robot bees that are no bigger than a penny.”

The UB-led research project, funded by a $1.1 million National Science Foundation grant, includes researchers from Harvard University and the University of Florida. It is an offshoot of the RoboBee initiative, led by Harvard and Northeastern University, which aims to create insect-inspired robots that someday may be used in agriculture and disaster relief.
Researchers have shown that robot bees are capable of tethered flight and moving while submerged in water. One of their limitations, however, is a lack of depth perception. For example, a robot bee cannot sense what’s in front of it. 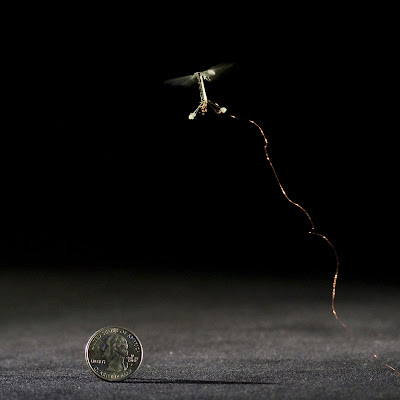 Credit: Microrobotics Lab, Harvard John A. Paulson School of Engineering and
Applied Sciences and the Wyss Institute for Biologically Inspired Engineering.
This is problematic if you want the bee to avoid flying into a wall or have it land in a flower, says Dantu, who worked on the RoboBee project as a postdoctoral researcher at Harvard before joining UB’s School of Engineering and Applied Sciences in 2013 as an assistant professor.

The UB-led research team will address the limitation by outfitting the robot bee with remote sensing technology called lidar, the same laser-based sensor system that is making driverless cars possible.