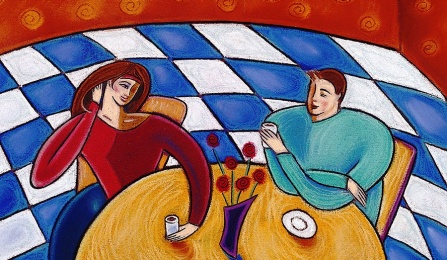 Qualities admired in another from far away can be threatening as that person approaches, according to UB research

(October 30, 2015)  What people believe they want and what they might actually prefer are not always the same thing. And in the case of being outperformed as an element of romantic attraction, the difference between genuine affinity and apparent desirability becomes clearer as the distance between two people gets smaller.

In matters of relative performance, distance influences attraction. For example, someone of greater intelligence seems attractive when they’re distant or far away in your mind. But less so when that same person is right next to you, according to a new study by a University at Buffalo-led research team published in the latest edition of the journal Personality and Social Psychology Bulletin.

“We found that men preferred women who are smarter than them in psychologically distant situations. Men rely on their ideal preferences when a woman is hypothetical or imagined,” said Lora Park, associate professor in the UB Department of Psychology and the study’s principal investigator. “But in live interaction, men distanced themselves and were less attracted to a woman who outperformed them in intelligence.”

Previous research has shown that similarities between individuals can affect attraction. This new set of studies suggests that psychological distance — whether someone is construed as being near or far in relation to the self — plays a key role in determining attraction.