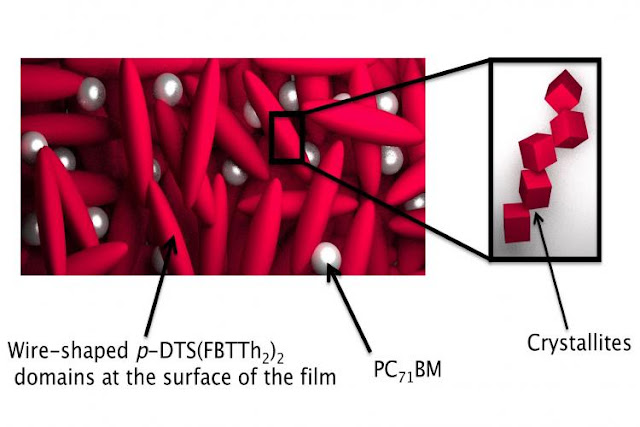 Fullerenes appear as small silver spheres spread consistently throughout a network
of small molecules, or polymers, in this schematic illustration of the morphology of
a BHJ film with solvent additives. Credit: ORNL.

(October 19, 2015)  Advances in ultrathin films have made solar panels and semiconductor devices more efficient and less costly, and researchers at the Department of Energy’s Oak Ridge National Laboratory say they’ve found a way to manufacture the films more easily, too.

Typically the films—used by organic bulk heterojunction solar cells, or BHJs, to convert solar energy into electricity—are created in a solution by mixing together conjugated polymers and fullerenes, soccer ball-like carbon molecules also known as buckyballs.

Next, the mixture is spin cast on a rotating substrate to ensure uniformity, then sent to post-processing to be annealed. Annealing the material—heating then cooling it—reduces the material’s hardness while increasing its toughness, which makes it easier to work with.

Now ORNL researchers say a simple solvent may make thermal annealing a thing of the past.

In a collaboration between ORNL’s Spallation Neutron Source (SNS) and the Center for Nanophase Materials Sciences (CNMS) —both DOE Office of Science User Facilities—postdoctoral researcher Nuradhika Herath led a team of neutron and materials scientists in a study of the morphology, or structure, of BHJ films.

“Optimizing a film’s morphology is the key to improving device performance,” Herath said. “What we want to find out is the relationship between the blend structures and photovoltaic performance.” Finding ways to tune the film’s morphology is as important as answering why certain film morphologies are more favorable than others, she added.

Researchers compared thermal annealing with a method that adds a small amount of solvent that aids in dissolving the fullerenes within the blend and helps to make the film’s structure more uniform.

The idea is to get the most uniform mixture of light absorbing molecules (e.g., polymers or other molecules) and fullerenes throughout the film. If the mixture is not uniform, clusters form and cause passing electrons to get absorbed, weakening the film’s ability to transport electrical current, which in turn decreases device performance.