On the Road to ANG Vehicles 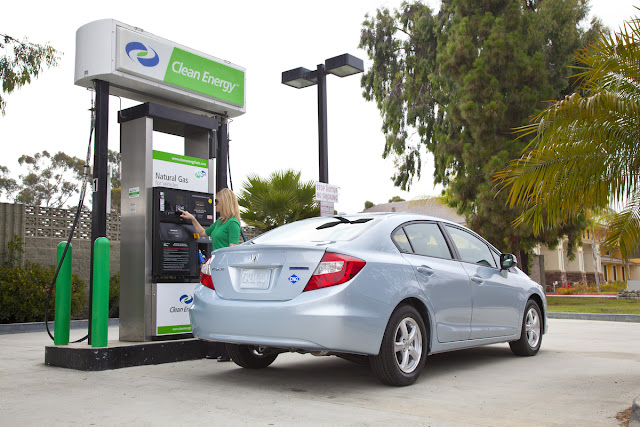 Metal–organic frameworks (MOFs) with flexible gas-adsorbing pores could make
the driving range of adsorbed-natural-gas (ANG) cars comparable to that of
a typical gasoline-powered car.

With new makes of all-electric and hybrid automobiles seeming to emerge as fast as the colors of fall, it is easy to overlook another alternative to gasoline engines that could prove to be a major player in reduced-carbon transportation – cars powered by natural gas. Natural gas, which consists primarily of methane (CH4) is an abundant, cheaper and cleaner burning fuel than gasoline, but its low energy density at ambient temperature and pressure has posed a severe challenge for on-board fuel storage in cars. Help may be on the way.

Researchers with the U.S. Department of Energy (DOE)’s Lawrence Berkeley National Laboratory (Berkeley Lab) have developed a variety of metal–organic frameworks (MOFs) – sponge-like 3D crystals with an extraordinarily large internal surface area – that feature flexible gas-adsorbing pores. This flexibility gives these MOFs a high capacity for storing methane, which in turn has the potential to help make the driving range of an adsorbed-natural-gas (ANG) car comparable to that of a typical gasoline-powered car.

“Our flexible MOFs can be used to boost the usable capacity of natural gas in a tank, reduce the heating effects associated with filling an ANG tank, and reduce the cooling effects upon discharging the gas from the ANG tank,” says Jeffrey Long, a chemist with Berkeley Lab’s Materials Sciences Division and the University of California (UC) Berkeley who is leading this research. “This ability to maximize the deliverable capacity of natural gas while also providing internal heat management during adsorption and desorption demonstrates a new concept in the storage of natural gas that provides a possible path forward for ANG applications where none was envisioned before.”

Long is the corresponding author of a Nature paper that describes this work entitled, “Methane storage in flexible metal–organic frameworks with intrinsic thermal management.” The lead author is Jarad Mason, a member of Long’s research group at the time of this study and now at Northwestern University.  (See below for a complete list of co-authors.)