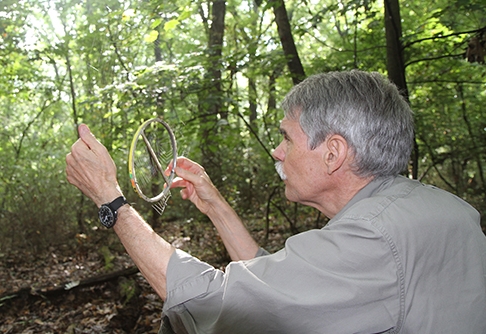 Brent Opell, a professor of biological sciences in the College of Science and
a Fralin Life Science Institute affiliate, collects a portion of a spider web.

(October, 26, 2015)  A taut tug on the line signals the arrival of dinner, and the leggy spider dashes across the web to find a tasty squirming insect. The spider, known as an orb weaver, must perfectly execute this moment, from a lightning-fast reaction to an artfully spun web glistening with sticky glue.

This glue -- created when glycoproteins are secreted from a spider’s abdomen and interact with the atmosphere -- has been studied for the past 12 years by Brent Opell, a professor of biological sciences in the College of Science and a Fralin Life Science Institute affiliate.

Material scientists are interested in mimicking this glue -- nature’s great adhesive -- for human products, and rely on biologists to determine factors involved in its creation, as well as its capabilities and limitations.

They tested the webs of five local spider species -- three that catch prey in broad daylight, and two that hunt at night or in deep forest shade shaded areas. 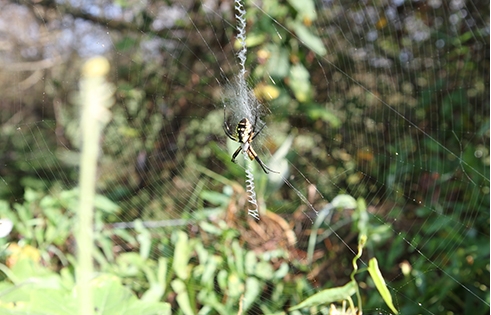 They found that the webs of sun-soaked spiders were far more resistant to UVB rays than the webs of those that hunt in the dark or shade, perhaps indicating an important adaptive trait.The results were published recently in the Journal of Experimental Biology and could inform efforts to develop new adhesives.

"Our study adds UVB irradiation to the list of factors known to affect the performance of spider glycoprotein glue, which includes humidity, temperature, and strain rate," Opell said. "It is important to more fully understand these effects as material science moves toward producing environmentally non-toxic and energy conservative adhesives inspired by spider thread glycoprotein."