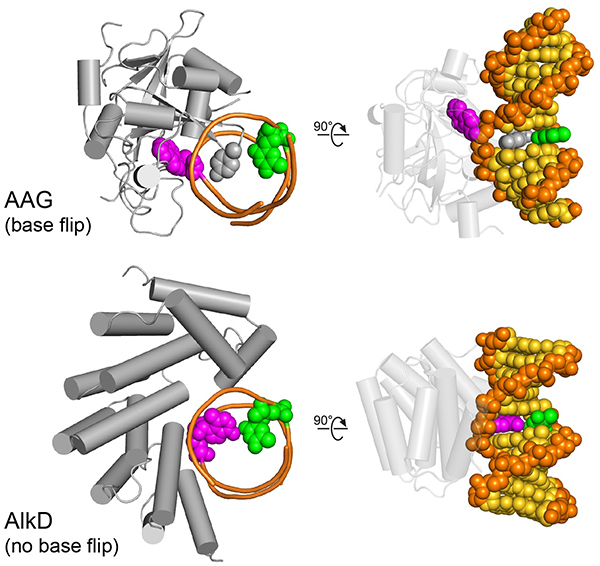 Top and side view showing the difference in the way that a normal DNA repair glycosylase
enzyme (AAG) and the new enzyme (AlkD) recognize a damaged DNA base. The AAG enzyme
bends the DNA in way that forces the damaged base to rotate from its normal position inside the
double helix to an outside position where the enzyme binds to it and removes it. In contrast,
the AlkD enzyme senses the chemical features of the damaged base through the DNA backbone,
without physically contacting the damaged base itself. The enzymes are shown in grey, the DNA
backbone is orange, normal DNA base pairs are yellow, the damaged base is purple and its pair
base is green. (Brandt Eichman / Vanderbilt)

(October 30, 2015)  This year’s Nobel Prize in chemistry was given to three scientists who each focused on one piece of the DNA repair puzzle. Now a new study, reported online Oct. 28 in the journal Nature, reports the discovery of a new class of DNA repair enzyme.

When the structure of DNA was first discovered, scientists imagined it to be extremely chemically stable, which allowed it to act as a blueprint for passing the basic traits of parents along to their offspring. Although this view has remained prevalent among the public, biologists have since learned that the double helix is in fact a highly reactive molecule that is constantly being damaged and that cells must make unceasing repair efforts to protect the genetic information that it contains. 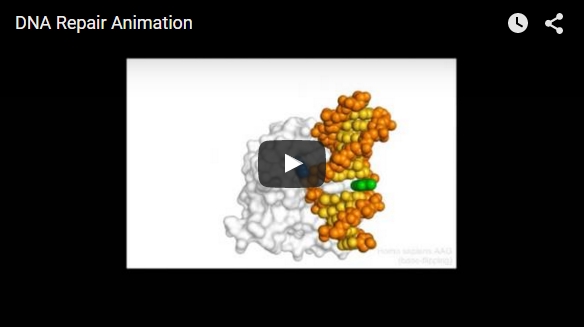 “It’s a double-edged sword,” said Brandt Eichman, associate professor of biological sciences and biochemistry at Vanderbilt University, who headed the research team that made the new discovery. “If DNA were too reactive then it wouldn’t be capable of storing genetic information. But, if it were too stable, then it wouldn’t allow organisms to evolve.”

The DNA double-helix has a spiral staircase structure with the outer edges made from sugar and phosphate molecules joined by stair steps composed of pairs of four nucleotide bases (adenine, cytosine, guanine and thymine) that serve as the basic letters in the genetic code.

There are two basic sources of DNA damage or lesions: environmental sources including ultraviolet light, toxic chemicals and ionizing radiation and internal sources, including a number of the cell’s own metabolites (the chemicals it produces during normal metabolism), reactive oxygen species and even water. 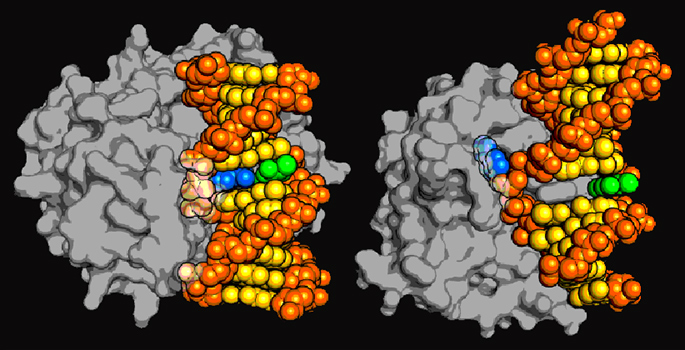 The new type of DNA repair enzyme, AlkD on the left, can identify and remove a damaged DNA base
without forcing it to physically "flip" to the outside of the DNA backbone, which is how all the other
DNA repair enzymes in its family work, as illustrated by the human AAG enzyme on the right. The
enzymes are shown in grey, the DNA backbone is orange, normal DNA base pairs are yellow, the
damaged base is blue and its pair base is green. (Brandt Eichman / Vanderbilt)

“More than 10,000 DNA damage events occur each day in every cell in the human body that must be repaired for DNA to function properly,” said first author Elwood Mullins, a postdoctoral research associate in the Eichman lab.

The newly discovered DNA repair enzyme is a DNA glycosylase, a family of enzymes discovered by Tomas Lindahl, who received this year’s Nobel prize for recognizing that these enzymes removed damaged DNA bases through a process called base-excision repair. It was the first of about 10 different DNA repair pathways that biologists have identified to date.