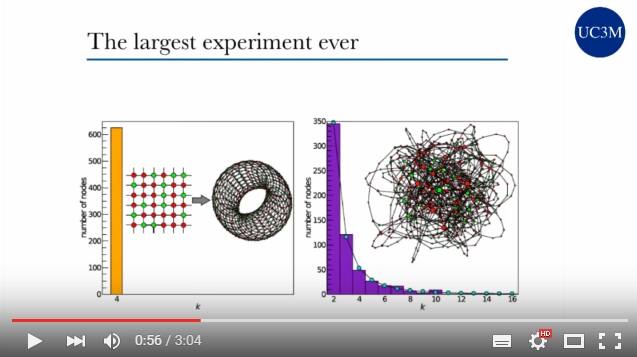 (October 27, 2015)  Resumen: Universidad Carlos III de Madrid is investigating how to build a system that recreates human behavior. This technology could be applied to anticipate behavior in socioeconomic crises, create more human-like robots or develop avatars of artificial intelligence which are almost indistinguishable from those that represent people.

The research project, called IBSEN (Bridging the gap: from individual behaviour to the socio-tEchnical Man), is part of a call for “novel ideas for radically new technologies” (FET-Open) by the European Union’s Horizon 2020 program. The UC3M coordinates the project and scientists in Spain from the Universitat de València and the Universidad de Zaragoza also participate, as well as other British, Finnish and Dutch researchers.

“We are going to lay the foundations to start a new way of doing social science for the problems that arise in a society that is very technologically connected,” explains the head of the project, Anxo Sánchez, from the UC3M Interdisciplinary Mathematics group.

The goal of the project is to understand the behavior of people on an individual level, especially when they are connected by new technologies like mobile telephones or social networks. To this end, this group of scientists is preparing experiments which will present certain problems of cooperation, social problems and economic games simultaneously to thousands of people to try to decipher the hidden patterns behind their decisions.

With this information, researchers will afterwards be able to create a simulator of human behavior, a technology that will provide a basis for socioeconomic simulations that will radically change many fields, from robotics to economics, with technological and social impacts like the formulation of policies and decisions about pressing social issues.

“The greatest difficulty is to design a new experimental protocol that allows us to ensure that all the participants in the experiment are available at the same time and really interact, because you are not observing them in a laboratory,” say the researchers, who are used to doing this kind of experiment in laboratories where they work with groups of 50 to 60 people, when in this case there are more than 1,000 participants.

The challenge posed by this project, once the experiments are done, is to obtain a repertoire of human conduct that makes it possible to simulate the behavior of a person and apply it to a robot or recreate what large groups of people will do in certain circumstances. “On an individual level, it could be used to improve the realism of characters in video games and humanize the avatars one interacts with in the help section of web pages,” said Sánchez. “And with regard to the simulation of collective behavior, it would allow us to try to understand the evolution of the economy and the appearance of social disorders.”