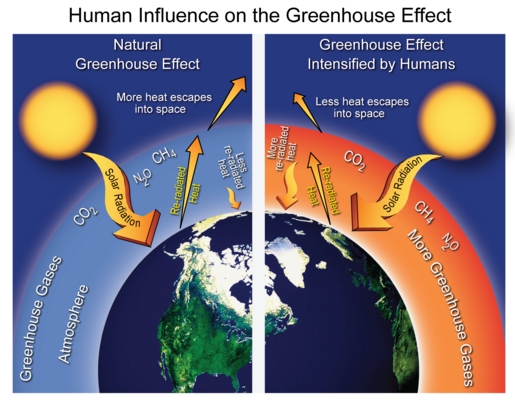 Figure: Human Influence on the Greenhouse Effect Caption: (left) A stylized representation of the
natural greenhouse effect. Most of the sun’s radiation reaches the Earth’s surface.
Naturally occurring heat-trapping gases, including water vapor, carbon dioxide, methane, and nitrous
oxide, do not absorb the short- wave energy from the sun but do absorb the long-wave energy
re-radiated from the Earth, keeping the planet much warmer than it would be otherwise. (right) In this
stylized representation of the human-intensified greenhouse effect, human activities, predominantly
the burning of fossil fuels (coal, oil, and gas), are increasing levels of carbon dioxide and other
heat-trapping gases, increasing the natural greenhouse effect and thus Earth’s temperature.
(Figure source: modified from National Park Service10).

Rising global temperature is causing major physical, chemical, and ecological changes across the planet. There is wide consensus among scientific organizations and climatologists that these broad effects, known as climate change, are the result of contemporary human activity. Climate change poses threats to human health, safety, and security. Children are uniquely vulnerable to these threats. The effects of climate change on child health include physical and psychological sequelae of weather disasters, increased heat stress, decreased air quality, altered disease patterns of some climate-sensitive infections, and food, water, and nutrient insecurity in vulnerable regions. Prompt implementation of mitigation and adaptation strategies will protect children against worsening of the problem and its associated health effects. This technical report reviews the nature of climate change and its associated child health effects and supports the recommendations in the accompanying
policy statement on climate change and children’s health.