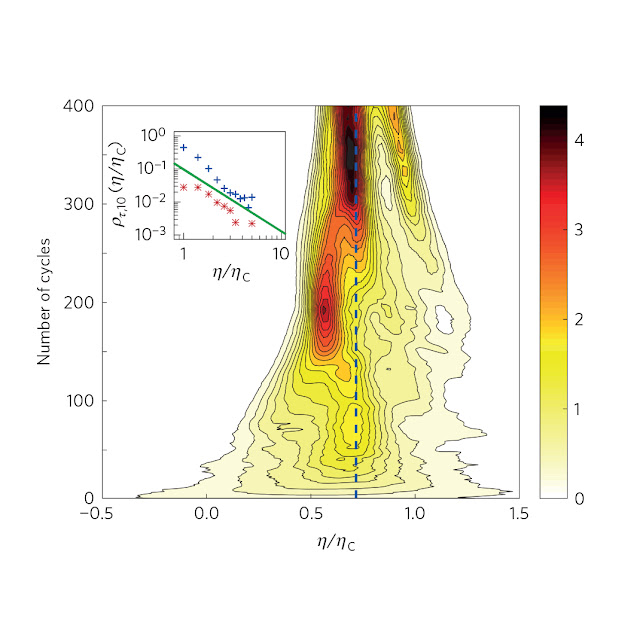 (October 27, 2015)  In a recent study published in Nature Physics, ICFO researchers Ignacio Martínez, Édgar Roldán, the late Dmitri Petrov and Raúl Rica, in collaboration with the Universidad Complutense de Madrid, have reported on the development of a microscopic motor operating between two thermal baths, that is, a micro Carnot engine.

At the macroscopic level, a thermal engine is what makes car engines work, where a substance such as gas is compressed and expanded at different temperatures, converting thermal energy into mechanical energy, and thus, making the car move. Almost two centuries ago, the theoretical studies by Carnot set an upper bound to any thermal engine. Unfortunately, the so-called Carnot engine is a theoretical construction never tested experimentally. In their study, the researchers focused their efforts in creating a “microscopic engine” with the same properties as the Carnot engine, allowing the experimental validation of one of the milestones of Thermodynamics.

They created microscopic motors that work using a temperature difference, exactly as the engines in cars work, using the temperature difference between the hot gas inside the piston and the air outside. Instead of using a gas, they used a single particle and lasers and electrical fields in replacement of the cylinders, pistons and crankshafts, although the functioning process is essentially the same. They developed the microscopic heat engine by trapping a microparticle with a laser trap and tune the effective temperature of the particle via noisy electric fields, which increase the Brownian fluctuations of the trapped particle. Moreover, by modifying the laser power they were able to control the confinement of the particle in the trap, a sort of effective volume analogous to that of the gas inside the cylinder of a car engine. The simultaneous control over these two parameters following specific protocols established the cyclic operation that any kind of engine has, in particular those that define the Carnot cycle.