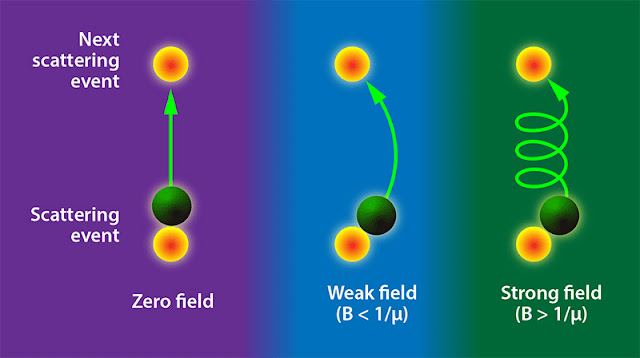 A team of researchers from Argonne’s Materials Science Division and Northern Illinois University,
working with researchers at Argonne’s Center for Nanoscale Materials, report two new findings
on tungsten ditelluride: (1) WTe2 is electronically three-dimensional with a mass anisotropy as low as
2, and (2) the mass anisotropy varies with temperature and follows the magnetoresistance behavior
of the Fermi liquid state. The results not only provide a general scaling approach for the anisotropic
magnetoresistance but also are crucial for correctly understanding the electronic properties of WTe2,
including the origin of the remarkable “turn-on” behavior in the resistance versus temperature curve,
which has been widely observed in many materials and assumed to be a metal-insulator transition.

(October 20, 2015) Scientists recently discovered that tungsten ditelluride (WTe2) is electronically three-dimensional with a low anisotropy. Anisotropy reflects the change in properties of a material when the direction of the current or the applied magnetic field is varied.

Similar to graphite consisting of weakly bound graphene layers, WTe2 is a layered material that could be reduced to few layers in thickness or a monolayer and be used in making nanoscale transistors in other electronics. The material was originally thought to be two-dimensional in nature because of the ease with which its layers could be separated.

WTe2 has been the subject of increased scientific interest since a 2014 research study outlined its unusual magnetoresistance, which is the ability of a material to change the value of its electrical resistance when subjected to an external magnetic field.

This particular finding "is interesting in its own right because it shows that the mechanical and electrical properties of a material are not always as closely linked as we may assume," wrote Kamran Behnia, director of quantum matter research at Le Centre National de la Recherche Scientifique in Paris, in an opinion piece on the latest research discovery about WTe2 published in journal Physics, which provides news and commentary on select papers from American Physical Society journals.

Researchers also discovered that the anisotropy of WTe2 varies and displays the magnetoresistance behavior of the Fermi liquid state, which is a theoretical model that describes the normal state of most metals at sufficiently low temperatures.